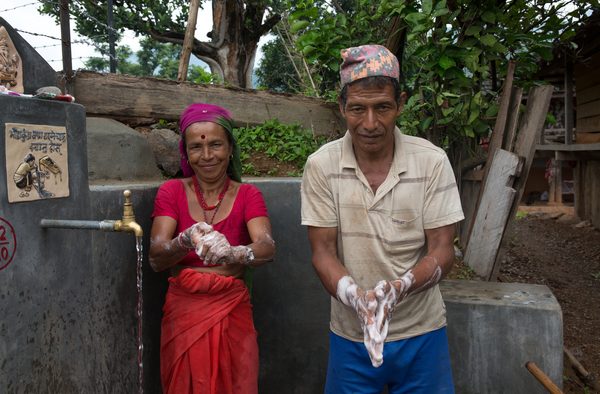 The Udayapur district, which is situated on the hillside, has established it as one of Nepal’s poorest water and sanitation coverage regions. However, Ammika, 48, and Hem Bahadur, 52, recently benefited from a sanitation system that was put in place within their community. The water condition was once very poor. But, now the couple is pleased to finally have access to clean water. “But, now we have access to water — the most important thing of our life — it feels great,” Hem said.

Curator’s note: The following is an excerpt of Ammika and Hem Bahadur’s story as told to WaterAid staff in June 2016.

Ammika: We have been living here for ages. We’re earning here, living our lives and we have our own home. So, this feels great. Everything is visible from the top of this hill. It feels good to live here.

Hem: Initially, I felt bad; the scarcity of water was always there. But, now we have access to water – the most important thing of our life – it feels great. The condition of the water was very poor. There was no proper access to water. There were no toilets either. People defecated everywhere. And since there was no water, the condition was rather worst. VDC had given us pipes but it was not efficient. People would cut pipelines so water was never frequent.

Ammika: During the scarcity of water, all of us brought water. It took us two hours to reach the source and fetch water. It was really difficult. And, if sometimes sources dry out we had to opt for other sources which equally took time. If there was no water anywhere near, we reached the river itself. We thought to ourselves how much life would be easy if we have close access to water. But, I never thought this would be our reality someday. Fetching water was always a problem, you know. Because the buffalos, cows, goats had to be fed water from the water we fetched. We required at least 12-13 Gagris of water every day. And it took 11-12 hours every day. During rainy season, we saved rainwater otherwise, the story was pretty much the same.

Hem: We used to get up early in the morning like 4 a.m. in the morning to fetch water. By 7 a.m., we would bring the water and continue for other jobs after that. If we didn’t do that, it would be hard for us to manage the time. So, that was the routine we followed every day.

Ammika: Because of scarcity of water, we cannot manage time for farming. Time management for work was really hard. Similarly, because of lack of water, there was no proper management in health and hygiene. We made a toilet after the intervention of this project. Otherwise, we would run to the jungle or to our farm. Washing ourselves after defecation was barely taken into account. There would be flies all over our kitchen. Now, we realize that we got sick because of our poor attention towards health and hygiene, but no one cared during that time. We were very ignorant in the past. But, we’ve improved a lot compared to our past. I would say the community as a whole has improved.

Hem: We suffered from diarrhea [and] dysentery during rainy seasons mostly. Doctors used to scold us. But, we cared less that time.

Ammika: Even the girls missed their classes. They had a hard time managing their time for doing homework. They had to wake up early in the morning to fetch water with me. With more people, we could bring more Gagris of water thus; we had to take them along with us. It was very tough. Now, we have closer access to water it feels super convenient.

Hem: Also, it saves a lot of our time which can be utilized for other works. If we compare to the past, there were no dishwashing slabs, drying rack or compost pit to collect waste. It is much more systematic and convenient now. Now, there are toilets and people have become healthier. The time for fetching water is saved. So, we can concentrate that time for farming, rearing cattle, spend time with the family, rest for a while, we can focus on our own personal cleanliness and hygiene. Now, we have water [at our] doorstep – it’s only a minute away. Now, we are really happy! Initially, when the project intervened we were not sure if it will even happen or not but, later on after someone came for measurement we were informed that the project had been actually sanctioned so, that was the joyous moment for us.

Ammika: Yes, we were a little bit skeptical because there were other people and organizations who had promised us the same thing but never did anything. But, this project was successful to bring water in each and every household and we are really happy about it. We also helped for the project. We contributed through the manual work. We accessed pipelines, dug the channels and carried sacks of cement and sand. So, we contributed together and I realized teamwork had a greater impact rather than individual effort. We were so happy when the water came for the first time, we partied. We had our moment of joy. All of us came together and celebrated. It was amazing. The moment feels surreal and imaginary. It felt so good.

Hem: To ensure the sustainability, we have appointed a caretaker. There is a fund where 50 rupees is deposited every month in the users committee. So, water and tap management is done that way. We also give a loan to people and the remaining fund is utilized for the management of water. The happy moment for me is I can bathe whenever I want to bathe after tirelessly working in the field. That feels great. We have evident a lot of changes after there is water in our village.

Ammika: We have harvested vegetables and plants for daily purpose as well. When we had to fetch water it was never enough to water such plants. Now, we have more homegrown vegetables. We feel very lucky that water has reached our home. Now, I wish if there were a road and school near us, our children would be better off by all of these facilities.