Gas Prices, Automakers and the Still Unanswered Question of Who is Dick 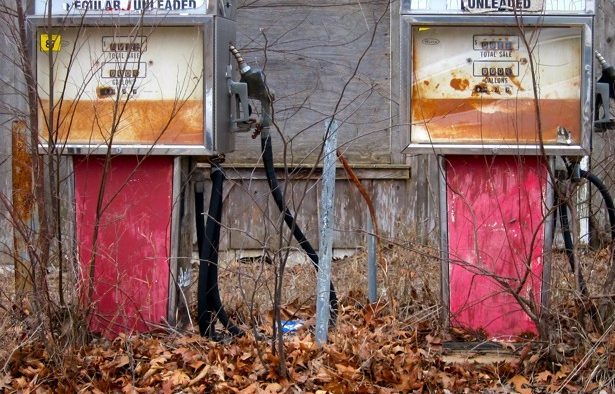 Most days a bit of humor is necessary just to get over the hump and onto the next one. Fortunately for me, I never have to look very far outside my own little world to find it. Case in point, my 84-year-old mother who currently is staying with my husband and me has the annoying habit of announcing gas prices as we drive along. In particularly congested, urban areas she begins to sound more like an auctioneer than a rural woman who has never seen more than 2 gas stations in a single stretch.

On occasion she will branch out into the automotive world and announce all the carmakers as they whiz by. Not to let this task go by unfinished, she will also ask what car that was that got by her before she could see the emblem or manufacturer on the quickly disappearing trunk. Today, while returning from a trip to the pharmacy where she insisted that she needed to complete a purchase for “unmentionables”—whatever those are for her age set—she moved her attention away from gas pumps and auto makers and boldly began reciting bumper stickers as we approached my neighborhood. All I can say is that thanks to the jacked up black Silverado with the “Don’t be a d*%k” slogan placed prominently at her eye level, I am now trying to avoid answering questions such as “Who is this Dick?” and “Did he run for Congress on Tuesday?” Hmmmmm that could actually be a legitimate question depending upon who your candidate was.

Which now leads me to how the rest of the day continued to unfold. But first I have to admit that I really love wine. Yes, I drink, which for most of those who know me, this isn’t earth-shattering news. Most recently, I drink because my mother is currently residing with me. I drink because on this particular afternoon, I spent a good portion of it concocting Manhattan clam chowder, which at dinner my mother announced was too tough to chew. It’s soup for crying out loud!!

“No, Mom,” I begin to get a bit too defensive over those clams, “the problem would be that your teeth aren’t working like they used to.”

“Might be,” she admits after finally succumbing to my half-hearted glare from across the dinner table.

And then I am pretty sure that she sneezed on the grilled tomato and cheese sandwich that this once in a blue moon gourmet cook placed next to the bowl of chowder that was meant for me. Yes, I drink.

I also write. Sporadically. Distractedly. Incompletely and sometimes without much direction. Writing is tough stuff. Particularly when you appear to everyone in your household to be pursuing a hobby. A pastime. Like golf. Or needlepoint. Not a real paying job. And for you doubters out there, and I know there are many and I even know who some of you are, this debate will have to wait.

Forced to share a desk in the home office with a husband who also has access to a comfy government cubicle down on Pennsylvania Avenue, hasn’t worked out so well lately. The cute concept of an antique partners desk has only aggravatingly proven that one “partner” owns more real estate in the office than the other.

So the only other logical office option left appears to be the master bedroom. With a sitting alcove that has been transformed into a library/craft area, shoving aside the piles of kids’ elementary artwork and school pictures, I decide to give this space another try. I had given up on this little piece of real estate many years ago, because it always felt more like being captive in a childlike timeout with the desk area facing an adjacent bedroom wall.

Reconsidering the space once more, I think that it might just work this time around. After all, I have cranked out some of my best work when not distracted, like when I am strapped in a seatbelt and being held captive for a three hour car ride. Maybe the white walled non-distractions this space has to offer will prove actually to be the best place in the house to engage my creative muse after all.

It sure beats my husband’s earlier suggestion of writing in the corner of the dining room, perched on a tiny loveseat sized antique couch from his mother’s side of the family. I point out how wrong he is about Stephen King cranking out his many successful novels in a similar setting. Can you imagine one of the all-time greatest novelists balancing his typewriter, notes and transcripts in progress on his two knees, perched atop a stuffy, old piece of furniture donated as an afterthought to the family cause by his mother-in-law because it was in such disrepair when handed over that I swear it got lucky as it was most likely already bound for the dump? Unfeasible writing solution compounded by bad juju. But that story also must wait for another time.

The thing that most people who are not writers fail to understand is that the creative process doesn’t just exist within a neat 9 to 5 timeframe. It needs space to evolve. To sit and simmer. It cannot be packed up and brought back out later without losing some of its power. And quite frankly, in some of that directionless writing that I tend to do, I would sooner die than have other human eyes happen upon by thoughts and inner contemplations laid bare in black and white, left open and vulnerable in public spaces.

In one last ditch effort of diplomacy to try and show workplace solidarity, because my husband makes it his life long mission to avoid being seen as anything less than fair, he points out the schedule of days when he is working in DC and when his desk, yes HIS desk, is vacant. I really think that his motives here are mostly driven by the indignation he feels of being labeled a real estate hog more than his daily pursuit of diplomacy with his life partner frequently labeled the biggest boat rocker of all time. Nice try but again, my work often simmers angrily and therefore the partners desk had ceased to be attractive to me even after hours of arguing for my equal rights in that situation. The muse can’t be boxed into a Tuesday through Thursday schedule anyway.

Now that I am once again trying to adapt to that timeout kind of office space, safely hidden upstairs, all wall facing and secluded, I have to admit that it’s working out pretty brilliantly after all. I can glance around without sensing that someone is lurking in the not so far off distance. Because you see, my mother when not memorizing Monday’s gas prices or counting how many Chevys are on the road any given Thursday, has yet to figure out which part of the house I have retreated and currently has no idea which doorway she should now occupy and hover on a regular basis. To stare at me. To ask me what I am doing and ultimately why do I write. Or to tell me that the microwave oven’s clock is off by a mere five minutes. Or that the cuckoo clock needs winding. Or to once again ask me who and where is Dick.

Picture courtesy of  “Small Spills at Gas Stations Add Up” The Atlantic October 10, 2014

The Only One
James Warren Dec 05

I Am Uncorked
James Warren Jun 15