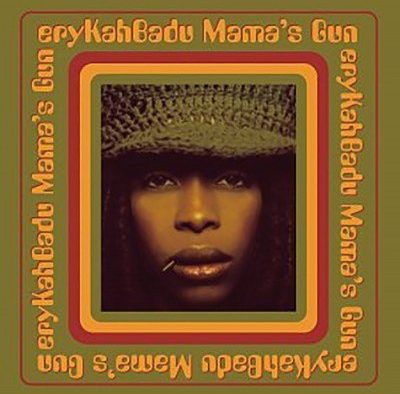 Sometimes we love a song because we hear it and we’re immediately struck by the singer’s voice, the melody, the words and the beat. So we listen to it, and we share it with others, and the song winds up being part of some of our more memorable life experiences. And that’s exactly what happened in my case.

In the fall of 2002, I had been listening to Erykah Badu’s “Mama’s Gun” CD for the better part of the past year. When I like an album or a song in particular, I listen to it on repeat. For. Ever.

I played this CD over and over again – at home, on the train and at work. And something about the track “Time’s A Wastin” just got into my head. I wouldn’t call it a romantic song, but to me, it is a song about love, about searching for love and finding it through loving yourself, loving your journey, loving your life.

And for anyone who doesn’t know me, I love love. When I went to a wedding in New York City in October 2002, this song had already pervaded my consciousness, and that’s when I met my wife. (My best friend was marrying her cousin.) We connected immediately and a long distance relationship ensued — she lived in Scottsdale and I lived in New York City.

The night before one of our first trips to see each other, I stayed up all night making a mixtape for her. (Yes, I was still making mixtapes in the early 2000s, in my late 20s/early 30s. And yes, she still has it.) “Time’s A Wastin” is on that mixtape, because it was part of the soundtrack of our earliest days together: when we met in New York City; when we stayed up on the phone talking all night across three time zones; and when we fell in love.

I still play the song occasionally. And now, as I get ready to see Ms. Badu in a few weeks at the Richmond Jazz Festival, I will listen to it again. And as I look back at that time in my life and reflect on that song, I listen to the words with more intention. I think about my wife and our journey together, having children, facing adversity and reaching for our dreams. And I think that what Ms. Badu was trying to tell me then (and now) is, “Get on with it, young man. Get on with loving yourself, your family, your life. Go Love. Because we literally don’t have time to live without love.”

Linkedin
Tags:
Previous Story
The love of my life
Next Story
Over digging Our Brain

A Juxtaposition of Perspectives
bjh923 Aug 26

The 2016 Richmond Jazz Festival: It’s All About You
James Warren Aug 26