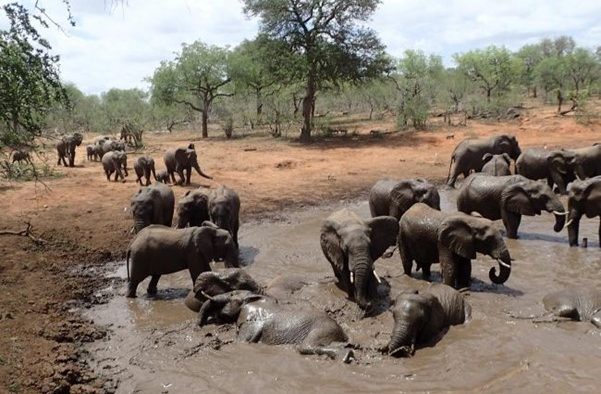 In 1975, my sister, Mary Evelyn, came to visit Tom, Lyle, and I while we were living in Dar es Salaam. We had been there for about a year and were delighted to see her. Right away, we began planning to show her around Dar and the rest of the country.

Most people were interested in seeing the amazing wildlife in Tanzania and we were no different. So we decided to visit Mikumi National Park which was about 5 -6 hours from Dar by road.  Normally one would book a tourist safari to get there, but being short on cash, we took an intercity bus that would stop at the park entrance on the way from Dar to Morogoro.

After settling down on the bus, we made friends with some of the other passengers, one of which was also a teacher. I told them I was a teacher and that my sister was visiting from California, in the western part of the USA. The other passengers became animated and welcomed Mary Evelyn warmly. We chatted with them for a while and then nodded off to sleep.

The road on which we traveled went through many miles of forests that were most likely were part of the park. About a half-hour before we reached our destination, we were awakened by voices. Some of the passengers had grown excited when they saw a few animals near the side of the road and began shouting, “Tembo (elephant,) Twiga (giraffe).” The more they shouted the more nervous I became. Weren’t these animals supposed to stay deep in the park?

Finally, the bus driver, who by this time had become part of the commotion, pulled over across the road from a narrow dark trail and announced our arrival. Mikumi Park! We gathered our bags and stood up, but I told Mary Evelyn, and the kids to stay in the aisle. I walked to the front of the bus, descended the stairs, and looked around. There was no one else on the road or on the trail and I was scared we might be attacked by animals. The other passengers watched and waited. Standing there with one foot on the bus step, I tried to make up my mind whether to venture out on the dark trail or to go on to Morogoro, where we could get a bus back to Dar. Finally, the bus driver told me he couldn’t stand there any longer and that we should get off or get back on. I could sense that my sister and the kids were also anxious. The bus driver and the teacher who was also a passenger tried to reassure me that it was safe.

After several minutes, I signaled to my sister and the children to disembark and we crossed the road to the woody trail. Huddled together, we walked quickly down the path while the driver watched for a minute. Then we were on our own. The entrance to the park was about a kilometer or half a mile from the road, so we hustled as fast as we could. All of a sudden, Tommy, broke away from us and ran into the bush to a humongous elephant, who was pulling leaves off a tree. I imagined my child being swished under the elephant’s foot. Afraid to yell, I shrieked through my teeth, “Tommeeeee, get over here.” Tommy took a photo and returned. The elephant ignored him. So we continued on our way. A few minutes later we saw the park gate and I silently thanked God. As we entered the park, I threw my arms around the park ranger who greeted us and I cried, “Ndugu!” (Brother)

The astonished ranger checked us in and showed us to our rustic cabin. That evening we ate a tasty dinner in an open-air dining area and after walking around a bit we retired to our cabin. There was no radio, just the eerie sounds of the bush. I told everyone to make a pitstop at the outdoor toilets before going to bed since there was no way we were leaving the cabin in the pitch dark.

After recounting the day’s events, I put out the oil lamp and we all went fast sleep. In the middle of the night, we were awakened by a scream that a lion had gotten in the cabin. I quickly lit the lamp, but it was just a dream.

Very early the next morning, a ranger took us on a game drive in a safari jeep and we were thrilled to encounter elephants, giraffes, herds of water buffalos, gazelles and wildebeest, and a pride of lions. That afternoon, we ate our last meal at the Mikumi Park dining room, gathered our belongings, and walked bravely back to the road where we waited for the bus to Dar es Salaam.

Why We Choose Morning Desert Safari In Dubai?
debraappleofficial Mar 21