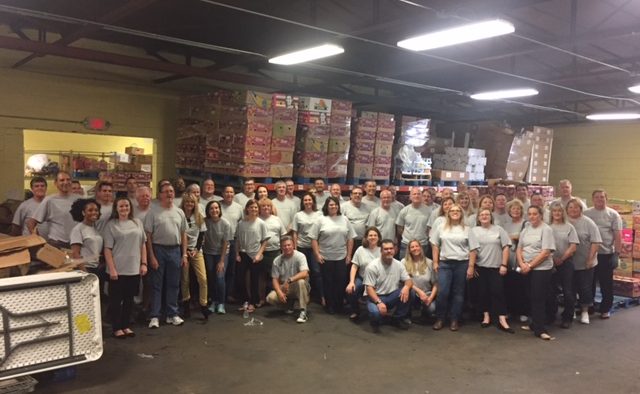 It could have been just another meeting.

Canteen’s Central Division gets together twice a year to go over success stories, innovations, and new programs. In October, the group met in Galveston, Texas.

Galveston is a cool place. It’s an island city on the Gulf Coast of Texas. There are State Parks, beaches and lots of fun things to entertain kids and families.

But Galveston isn’t only a tourist destination. Like many places in the country, the island city has a fractured population, people who are homeless and in need of basics, like food.

“It doesn’t happen without you. We can’t move five million pounds of food a year without volunteers.”

On October 25th, Alex Taylor stood in front of 60+ Canteen Central Division associates and Canteen executives, and thanked each person. Canteen Central Division was volunteering at the Galveston County Foodbank.
Alex believes it was the biggest group he’s ever worked with. And as the guy who helps run the Galveston County Food Bank, Alex has seen a lot of volunteers.

Our group weighed, sorted and boxed thousands of pounds of food. A lot of it will go to shelters, shut-ins, and seniors in Galveston County who are hungry. Some of the food will also go to kids who often don’t get enough to eat on weekends, when they are out of school.

“Canteen Central is a great group. They care so much about their clients, each other and today they showed they also care about the communities we serve,” said Division President Marc Boman.

Through the Food Recovery initiative, Compass Group has committed to do its part to eradicate hunger, and to contribute to the health and well-being of the communities we serve and the communities we live in. There are lots of ways to do that. And on this October day Central Division did it selflessly. The team left a business meeting, and instead of checking emails, making calls, or socializing, they went into the community and rolled up their sleeves.

It could have been just another meeting.

To Stand United at Home and Abroad
James Warren Feb 27