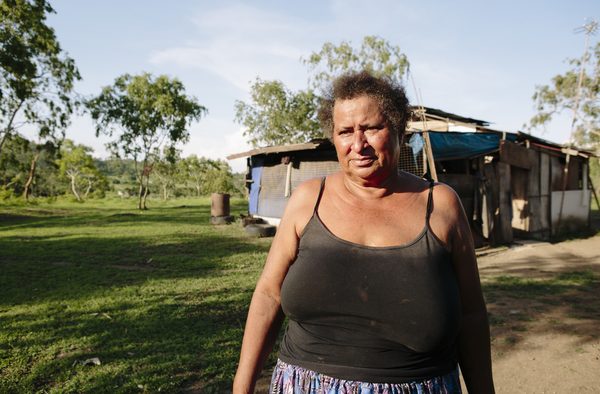 Papua New Guinean Elizabeth Ila, 53, works at a small snack shack and her husband works construction to try to make ends meet. “We have no electricity, but the biggest problem is water,” Ila said. Fortunately, Ila’s family owns a well, but it is primarily used to bathe and to wash clothes. However, if situations are very demanding, the family will boil the water for consumption. But in the fall of 2015, the country faced its worst drought in years. As a result, Ila’s well ran dry for two months. This forced Ila’s family into survival mode and to use the water they did have solely for cooking and drinking and not for bathing or washing clothes.

Curator’s note: The following is an excerpt of Elizabeth Ila’s story as told by WaterAid staff in spring 2016.

“We have no electricity, but the biggest problem is water,” Elizabeth Ila said.

“We’ve been struggling for a long time. We get no support from the government. The politicians arrive and make promises at election time and then nothing happens.

“Sometimes we find it hard to get water but we are lucky to have a well.

“I dug my own well. I’ve looked after it well. I cover it properly.” (She has a lock on the lid of the well to stop people using it and then not putting the lid back on.)

Ila and her family use the well water for bathing and washing clothes, but not for drinking. She buys water for drinking and cooking from Waterboy (water delivery service) — 20 litres K3, 44 gallon container K20.

“Often we have to wait for Waterboy,” she said. “It fills the big tanks first before coming to the small households. Government contracted Waterboy to supply nearby villages. It often didn’t come to Gereka.

“Sometimes when there’s no water at all we boil the well water and drink it.”

Sometimes, she takes containers to fill up at relatives in the city. It’s K2 for a one-way trip. Sometimes they go many times a day – can be up to K16 in travel costs.

“The water in the well can get very dirty but we have no choice but to wash,” Ila said.

“I make sure the children don’t drink dirty water.

“All the communities around here have the same problem with water.

“When we sell a lot from our market stall, we can afford Waterboy. When it’s not so good, we can’t.”

Sometimes Elizabeth gets water from a relative in 6 Mile (about 10 km away), but that bus trip costs K2 both ways. Also, the water in the city often gets cut off. Sometimes, they have to wait up to six hours for it to come back on.

During the drought, the family’s well ran dry for about two months.

“Sometimes in the drought we went a whole day and night without water,” Ila said. “When worst came to worst, we just used water for drinking and cooking. We no longer washed or washed our clothes.

“When things are bad, the children argue over drinking water.

“When the rain finally came, that was a happy time!”

The family’s biggest expenses are food (about K100 per week); land rent (varies according to the ability to pay) and school ‘project fees’, uniforms, shoes and stationary.