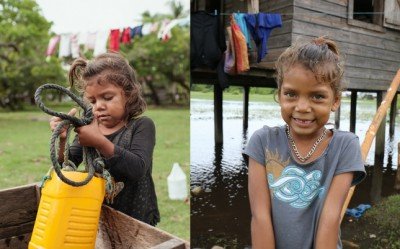 Two years ago, you got to meet the small and charming Caricia from Wawa Bar, a remote fishing community in Nicaragua. Back then she was just four years old and would help her mom collect water each day.

There were three nearby wells to choose from, all of which were frequently contaminated, they would even find worms in them, and have to go looking again.

In the rainy season especially the situation would worsen. Caricia would get sick about three times a month, Carla told us. “Sometimes I get worried, not just me but my husband also, and so we don’t sleep at night.”

Fast forward to 2017 and it’s a very different story. Together we turned the rainy season from a problem, into a solution: Caricia and her family got a rainwater harvesting tank which stores rainwater safely throughout the year.

Caricia with her mom and big brother at their home in Wawa Bar.

I arrived in Wawa to see the wooden homes on stilts, painted an array of colors and now, rainwater harvesting sprinkled throughout.

Carla, told me how the overall health and energy of her kids has improved. They no longer miss days of school because of dirty water. And now, the family has more time to spend together –growing, laughing and going to school!

Caricia is now six years old. She is in the first grade, enjoys math and really likes counting. At the moment, she’s a future nurse in the making!  She is full of energy, creativity and innovation. In her spare time, she likes to collect knick-knacks like bottle caps which she then uses to create play kitchens and other toys.

When I visited, it was rainy season so the area gets flooded. This is about the time that Caricia would have been falling sick even more often. But, Carla tells me, “Now we get water for everything from the tank and it’s right next to our home!”

“After the first WaterAid visit two years ago, we got a tank soon after. The tank has benefitted us in many ways… Overall, health has really improved and the time we use to spend collecting water we now spend on cleaning and fixing up the house. The girls don’t have to go to the well to collect water anymore. When it’s time to go to school they get water from the tank, shower and then head out.”

“I feel that access to water is one of the most important things and now we have it and we use it for everything.”

Caricia and Carla with their rainwater harvesting tank when it first arrived.

Carla has a gentle and resilient heart and is now focusing on a larger picture, encouraging her kids to focus on their education so that one day, hopefully, they’ll have the opportunity to travel and learn in different countries. Water is just the beginning.

Over the last two years 696 people, including Caricia and her family, now have access to clean water from rainwater harvesting tanks – thanks to the amazing collaboration between the community and WaterAid supporters.