I’ve decided to talk about things as they occur to me, rather than subject you to a chronological slide show like our parents’ friends used to bore us with (“… and here’s another shot of Esther and me wearing leis at the Luau on Wakiki …. “)

SO … a few words on the Tuskegee Airmen.

When I taught at NYU, one of my colleagues in the Department of Educational Psychology was Dr. Roscoe C. Brown, Jr.  We served on academic committees together, and I found him to be very sharp, politically savvy, with a wry sense of humor.  He was a person who had no patience for muddled thinking.  Only after two years or so at NYU did I learn that Dr. Brown had been one of the “Tuskegee Airmen,” a group of African-American pilots and support teams trained in Tuskegee, Alabama starting in 1941, who fought with distinction in World War II.

In Alabama, in the 1940s, Jim Crow was the law of the land — segregation, insult, fear, injury and death — based on the white power structure’s adherence to white supremacy.  Montgomery, a 40-minute drive west of Tuskegee, is known as The Cradle of the Confederacy.  The first “White House” Jefferson Davis presided from, was in Montgomery.  Montgomery, from 1810 or so, on to the end of the Civil War, had the largest slave trade market in the South. That poisonous legacy morphed into Jim Crow, and the barriers it created for people of color are so hard for white Americans to imagine, that most of us don’t even try, or fabricate comforting explanations like The Lost Cause Myth.

So, to be African American in the 1940s and to become a pilot of arguably the hottest airplane the Army Air Force flew in WW II, the P-51 Mustang, was a one-in-several-million shot.  Roscoe C. Brown, Jr. flew a P-51 Mustang.

Here is an excerpt of information about him from an online obit:

Capt. Brown commanded the 100th Fighter Squadron of the 332nd Fighter Group, known as the Tuskegee Airmen, during World War II. He flew 68 long-range missions from August of 1944 to March of 1945.  He’s credited with being the first 15th Air Force pilot to shoot down a German jet fighter, a feat that happened on March 24, 1945 while escorting bombers near Berlin. It was the longest escort mission to take place in the war.

Anita and I stopped in Tuskegee on our drive from Atlanta to Montgomery, to visit the Tuskegee Airmen National Historic Site.  Below are three photos. 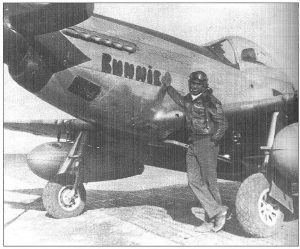 Captain Roscoe C. Brown, Jr. with his plane “Bunnie,” a shot that I found online. 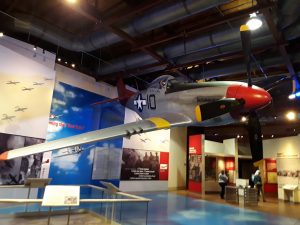 A shot I took of  the P-51 Mustang on display at the National Historic Site. 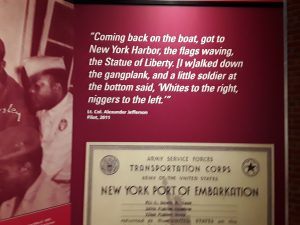 A shot I took of a display placard with a quote from Tuskegee Airman Alexander Jefferson on what happened to him upon disembarking from the military transport ship that brought troops back from Europe to the U.S. at the end of WW II.

To Stand United at Home and Abroad
James Warren Feb 27