Fear and Clothing in Birmingham

We walked for miles in every Southern city we visited.  Urban walking.  We wore jeans and sneakers.  Sidewalks.  Paved park paths.  Asphalt.  Cement.  Church to parsonage to park to museum to memorial.  We chose centrally-located hotels where we could walk to that city’s Civil Rights sites of 1950s and 60s.  But on our last day in Birmingham, Alabama, Anita and I took a two-mile walk in Ruffner Mountain Nature Preserve, an overlook park within the city limits.

In the late 19th and early 20th centuries, Birmingham’s Ruffner Mountain was a center of iron-ore mining, limestone quarrying, and smelting – heavy industries that powered the aggressive rise of “The Magic City.”  The deposits were played out by the mid-1950s, and the scarred mountain was abandoned.  Today, thanks to nature’s ability to renew itself, and protection legislated by ecologically-minded Birminghamsters, Ruffner Mountain provides peaceful green forest respite from the semi-trailer trucks growling through Alabama’s largest city.

At the beginning of the “Quarry” Trail, we puzzled over a bit of graffiti written in elegant silver calligraphy on one of the sign posts.  A passing jogger in short shorts joined us to try to decipher the code, then he trotted on up the broad trail.

On our walk, punctuated by birdsong and astonishing tree bark, Anita used her cell phone to record the pure, repeating note from a bird we could not see. Five minutes later, serendipity brought another person toward us, an L.L. Bean type with binoculars slung around his neck.  Anita asked, “Are you a birder?”  The man said with a smile that yes, he was.  Anita said.  “Maybe you can help us?  I just recorded a bird.  If I play it for you, could you tell what it is?”  The birder said he’d try, but probably couldn’t.  Anita played the cell phone recording.  “Titmouse!” the man said immediately.  “It’s a Titmouse.  Lovely bird.”  We thanked him and then he, like the jogger, continued on ahead of us up the trail.

About 15 minutes later, another man came toward us.  Maybe in his early30s,  grayish white skin, not the healthy outdoorsy look of the jogger and the birder.  Unshaven.  Wearing non-descript semi-hunting gear, brown and khaki, a dirty brown baseball hat, and ear-buds with those stethoscope-like  extensions.  Anita was in front of me.  I don’t know if she looked at the guy as he passed, but he and I made eye contact.  I nodded.  He didn’t nod, or smile.  He just stared.  Dead eyes.  And then he was past and on behind us going the other way.  He freaked me out.

I didn’t say anything to Anita about the guy, because I didn’t want to infect her with my paranoia, but I had an immediate and strong feeling he was dangerous, a predator of some kind.  It’s not a response I usually have about people.  For the next 15 minutes or so, I kept looking over my shoulder.  I was dripping adrenaline.  I looked from side to side on the trail for downed branches I might use for defense, or loose rocks I might pick up and swing.  I’d frightened myself, to the point I was experiencing tunnel vision with grayed-out colors, all punctuated by the mental headlines, “Elderly couple’s throats slashed on Ruffner Mountain.”

Then the jogger came back toward us, having gone to the end of the trail and now on his return leg.  His presence was a great relief to me.  He said a few words to us as he passed us – telling us what he thought the graffiti was that we’d tried to figure out at the trail head.  It made me laugh, and suddenly the gray dangerous world of fear I’d immersed myself in dissipated and I was back into the green, lush wonder of the nature preserve.  I reasoned that with the jogger heading in the direction the other guy went, the predator (the only word I can think of to describe him) wouldn’t do anything because there were too many people around.

Then the birder also came back the other way, and his soothing binoculared presence made everything completely right with the world.  We finished our two-mile walk, sat down at a picnic table near the preserve’s headquarters and nature display building, ate the left-over pizza we’d packed, and hit the road headed back to Atlanta. 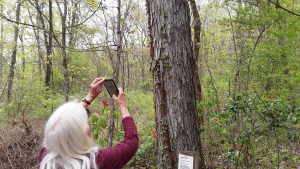 Anita and a shag-bark hickory tree regard each other – Ruffner Mountain.

I go on about the guy, the “predator,” because, on our trip, as we stopped at each of the ground-zero sites of Civil Rights marches, sit-ins, rides, boycotts, and demonstrations, I thought about fear.  In Ruffner Mountain preserve, in a sylvan setting, with my life partner, surrounded by birdsong and wild flowers, one passing look from some leery looking guy had scared the shit out of me.

I thought of John Lewis and Hosea Williams on March 7, 1965, leading the protest march over Selma’s Edmund Pettus Bridge.  There wasn’t just one guy in a dirty brown baseball cap and earbuds who’d stared at Lewis, Williams and the non-violent marchers they led.  There were armed, helmeted and gas-masked State Troopers.  There was Sheriff Jim Clark and his armed County deputies, some on horseback, all carrying clubs.  Behind them there was a crowd of hyped-up white locals who Clark had deputized en masse that morning.

No, it wasn’t just one guy, and it wasn’t just a passing stare directed at John Lewis and Hosea Williams as they led the march over the rise of the bridge and headed down toward the malevolent posse of armed, masked, helmeted, club-wielding white men.  It was Hate directed at the non-violent marchers.  Deep, furious Hate.  Hate fed by the centuries-old ideology of white supremacy.  And it had the fists, guns, clubs and teargas ready to express itself violently.

John Lewis age 26, and Hosea Williams age 39, had to be scared.  How could they not be?  In their places, I could not have done what they did.  Not a chance.  I’d have been paralyzed.

But Lewis in his signature light raincoat, Williams in a darker overcoat – both in coats and ties, leading hundreds of marchers who had assembled at Brown Chapel AME Church and had come through downtown Selma to the bridge – didn’t flinch or falter.  They walked over the humped bridge and down to the Selma town line.  The State Troopers and County deputies were arrayed across the road at that line – the line where Selma’s jurisdiction ended and state and county jurisdiction reasserted itself.

Hosea Williams called across the gap to Major John Cloud of the State Police, asking to talk. Cloud refused, saying there was nothing to talk about, saying the marchers were breaking the law and should go back where they came from.  Seconds later his State troopers advanced with billy clubs, first poking the leaders, then running forward into the mass of marchers, swinging their clubs, beating down whoever they reached.  John Lewis went down hard.  Blood flowed from torn scalps.  Bones broke. Teargas was next.  Then police on horseback charging into the crowd swinging clubs.  This was March 7th, 1965.  Selma.  Bloody Sunday.

“I learned that courage was not the absence of fear, but the triumph over it.”

“You gain strength, courage, and confidence by every experience in which you really stop to look fear in the face. You are able to say to yourself, ‘I lived through this horror. I can take the next thing that comes along.’”

How Can You Easily Cancel or Change Your Driving Theory Test?
matildawarner Sep 30