We drove west on Alabama state and county roads – blue highways – from Montgomery to Selma:  beautiful farmland, flowering trees in spring bloom, small towns, and, unlike the winter-bitten roads in the North, smooth surfaces all the way.   I drove.  Anita bonded with her cell phone’s Google Maps navigation system, an entity I call “Ms. Google.”  The three of us made it to Selma with no problem.

We parked in front of the Selma Interpretive Center, kitty-corner from the Edmund Pettus Bridge.  The Center looks out on the starting point of the short-lived March 7, 1965 civil rights march led by John Lewis that ended in Bloody Sunday.  Two weeks after that brutal attack, on March 21, some 2,000 marchers began the Selma-to-Montgomery march from that same point, headed by Martin Luther King, Jr. and other civil rights leaders. The four-day 54-mile march, a demand for voting rights, ended on the steps of the State Capitol in Montgomery, the building that housed the office of then Governor George Wallace.  Half a mile before arriving at those steps, the marchers, now 25,000 strong, passed through Court Square, originally the center of Montgomery’s slave market from the early 1800’s.  In his 1963 gubernatorial inauguration speech two years before the march, Wallace had drawl-shouted to his white audience, “Segregation today, segregation tomorrow, segregation forever!”

One of the Park Rangers at the front desk of the Center told us that local civil rights leader Joanne Bland, who had marched with Dr. King from Selma to Montgomery, was speaking to a high school class on the third floor, and we might be able to catch the end of her presentation.  We took the elevator up, and walked into a large room with a row of windows down one side looking out onto the Alabama River and the Edmund Pettus Bridge. 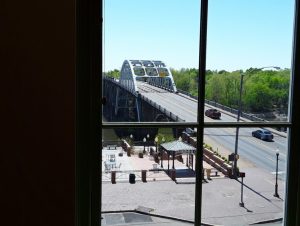 The room was filled with African-American teenagers seated on folding chairs.  We slipped into a couple of empty seats in the back.  Joanne Bland was a commanding presence, and the kids listened intently to what she was saying.  She was in her 60s, robust, no-nonsense.  She spoke with authority borne out of personal experience.   She was just 11 when she made the Selma-to-Montgomery march. Unfortunately, we’d missed most of her talk.   She was just finishing a question and answer session.

Her closing statement helped us make up for what we’d missed.  She spoke about the importance of joining others and taking action when you see injustice.  She spoke about Jimmie Lee Jackson, a young black participant in the voter rights movement.  Jackson had been killed by police in Marion, Alabama, just weeks before the Selma marches.  She said that when you join together, each person becomes a piece of the puzzle, like Jimmie Lee Jackson was a piece.

The kids said “I’m the most important piece,” in a low unison voice.

She raised her voice and said, “Say it again, ‘I’m the most important piece.’”  The kids repeated the phrase somewhat louder.

“Say it like you mean it,” she said, “even the white folks at the back.”

We all yelled, “I’m the most important piece!”

She nodded her approval.  “Now we’re going to go down and walk across the Pettus Bridge.  And I don’t want anybody running ahead.  If you do, I’ll have state troopers on the other side with billy clubs.”  Wry Alabama marching humor.

Anita and I went back downstairs to cycle through the exhibits.  The Interpretive Center’s collection of photos and objects are vivid reminders of African-American voter suppression that boiled over in Alabama in the 1960s and culminated in the long march to Montgomery.  There was a lot to absorb.

After we’d spent more than an hour there, we were museum-fogged.  We decided to get outside into the beautiful day and take a walk to Brown Chapel AME (African Methodist Episcopal) Church.  This was the church where the marchers congregated before the 1965 Selma voting rights marches.  It was the only place they could congregate.  Back in those days in Jim Crow Alabama, “vagrancy” laws made it illegal for African-Americans to congregate in any location other than a church.  Any march by black people was de jure illegal and de facto dangerous for the marchers.

We walked east along Water Avenue, and began to understand that Selma was a dying town.  Shuttered buildings.  Tattered “For Sale” signs.  No one on the streets.  Old wood frame buildings in need of carpentry and paint.  Crumbling brick structures.  Closed stores with metal gates over the windows and faded signage over the doors.  You could imagine tumbleweeds blowing down deserted Water Avenue.

On our walk to the church, at the suggestion of a ranger at the Center, we stopped at the Old Depot Museum at the corner of Water Avenue and Martin Luther King Street.  We both thought it was going to be a restored railroad station, but in fact it was the site of the huge military supply depot that served as a major distribution center for arms and ammunition supplying Confederate armies throughout the South during the Civil War.  Entering the old frame building, we were met by its attractive, voluble curator Beth Spivey.  She told us the story of how she had come to be curator.  I had a more pressing question.  “What happened to Selma?  It seems like a ghost town.”

“What was the name of the air base?”

“Craig Air Force Base,” she said.

“Are there any hopes for other kinds of development,” I asked.

“Nope,” she said.  “No super highway, so we’re just cut off here.  Crime rate growing.  Rich kids do heroin.  Poor kids do meth.”   We decided to save the Old Depot Museum tour for another time, thanked Beth, and headed up Martin Luther King Street to Brown AME Church. 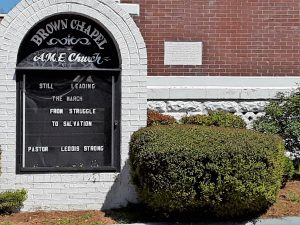 The announcement board on the front of Brown Chapel AME Church, Selma, Alabama.

It was locked.  Side entrance also.  We shrugged off our frustration and started back to the Interpretive Center.  We walked down a deserted Alabama Avenue, the route the 1965 marchers took from the church to the Pettus Bridge.  Anita led us on a detour down a side street, hoping to find a historical marker, and there it was.  It marked the location where, on the evening of March 9, 1965, Unitarian minister James Reeb and two other ministers, all of them white, were attacked by several local segregationist white men.  Reeb and the other ministers had answered Martin Luther King’s call, broadcast after the March 7 “Bloody Sunday” violence, for people of faith to come to Selma and bear witness.  Hundreds did.  Reeb came from Washington, D.C.  The meeting place for local people and travelers supporting non-violent action was Brown Chapel AME Church.  On March 9, Reeb and the two others were returning to the church after going out to dinner at an integrated restaurant when the attackers waylaid them and beat them with clubs.  Two days later, Reeb died of head injuries.   His murder sparked immediate national media coverage and outrage.

There had been no such national outcry over the death eleven days earlier of Jimmie Lee Jackson.  Jackson, who was African-American, a Vietnam War veteran, a father and church deacon, was participating in a voting rights march in his home town of Marion, Alabama, a 40-minute drive northwest of Selma.   The February 18 march was at night.  The town’s street lights were suddenly turned off, and state and local police attacked the marchers under cover of darkness. Jackson was clubbed down.  When he got up to try to protect his mother who was also being beaten by police, he was shot twice in the stomach at point-blank range by an Alabama state trooper.  Jackson died eight days later of his infected wounds.  The state trooper who shot him continued in his job.

Jackson’s murder did not register on the national consciousness.  It did, however, grieve and infuriate civil rights leader James Bevel, who said he wanted to carry Jimmie Lee Jackson’s body to Montgomery, to the steps of the state capitol for Governor George Wallace to see.  Bevel’s statement was the seed of the idea for a march from Selma to Montgomery.

We stopped briefly back at the Center, then headed for the Pettus Bridge.

Anita commented on the irony. The Edmund Pettus Bridge was named for an Alabama lawyer who strongly supported the institution of slavery, went west to kill indigenous people in California in the 1850s, organized an Alabama infantry regiment in 1861, fought for the Confederacy, and after the Civil War became a U.S. senator while also finding time to take a high position in the Ku Klux Klan.

Today, the bridge named after this man is remembered not for the man, but as the starting point of the great civil rights marches that caused President Lyndon Johnson to sign the Voting Rights Act of 1965.  It symbolizes the determination of people of color to stand up to and conquer oppression.  It is a symbol of hard-won rights, the success of non-violent protest in the face of violence, and a major win in the fight for equality.  There had been some effort, considering who the bridge was named after, to change the name of the bridge, but one of the rangers told us that local residents who continue to fight for civil rights enjoy the thought of Senator Pettus spinning in his grave because his bridge has become an international symbol of the struggle for equality by people of color.

Those things were on my mind as we started our walk over the bridge.  But a need to be mindful not to get killed brought me back to the vivid present.  The pedestrian walkway on the edge of the bridge was narrow, and with just a knee-high traffic barricade between us and the high-speed truck and car traffic barreling past us on our right as the bridge carried Alabama State Route 80 over the Alabama River into Selma.  Going in the other direction, the way we were walking, Route 80 was the path the marchers took on March 21, 1965 out of Selma and on to Montgomery.  Back then, traffic was held up because of the march.  Here, I could have reached out and touched the cars as they blew past.

Walking space became even more critical as we reached the center arc of the bridge and started downhill.  There were four people coming toward us single-file on the walkway.  There was just enough room for us to pass without touching each other.  The lead person in the approaching group was an African American woman, maybe in her 40s.  The rest of the group were also African American people of varying ages.  I was leading our Anita-Jim group of two.  The woman looked at me as the distance between us closed, and then she did something that astonished me.

She smiled, said, “All right!” and held up a hand for me to high-five.  We slapped hands, and it triggered high fives between all of us, all the way down the line as we passed each other.  It was a statement acknowledging our shared presence on the bridge, the reason we were all there.  It was the best thing that happened to me in Selma. 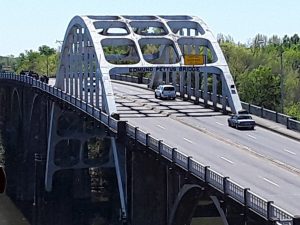 Linkedin
Tags:
Previous Story
Hopes and Dreams Since 1619
Next Story
Fear and Clothing in Birmingham

Why We Choose Morning Desert Safari In Dubai?
debraappleofficial Mar 21