Growing up in New York, the Twin Towers of the World Trade Center were a constant presence in the cityscape – and in the city’s psyche. Bland, boring, monolithic. Nevertheless they became accepted over time, and eventually, iconic.

In fact, one of my earliest memories of the Twin Towers was seeing them in the backdrop of Superman 2, one of my favorite movies of all time, and arguably the best piece of cinema ever made.

Yes, the Twin Towers, despite the failed attempt to bring them down in ’93, were strong, and an immovable part of New York. I thought they’d always stay, and perhaps outlive me.  Until that sad, sad day in September, when everything changed.

I rode the LIRR train in from Queens that morning as I usually did, and although I was consumed by my breakfast (or, more accurately, consuming it), I noticed a murmur on the train. I looked up, and saw the top of one of the towers billowing smoke and fire.

Now this was before the days of mobile broadband and social media, so we heard our news from the radio – in particular 1010 WINS (great station, by the way) – and from word of mouth. For the most part, people suspected a small plane had crashed into the World Trade Center. No one could imagine the scale of the horror that would be revealed as the morning progressed.

I got to Penn Station, and by the time I got off the train, it was evident something much worse had happened. The stress and pain was visible on people’s faces. People were shouting and cursing, so I stopped someone and asked them what happened, and they said, “Terrorists bombed the World Trade Center!”

Well, I didn’t know exactly what that meant, but I suspected I needed to get “topside” to find out. So I headed for the nearest exit, and as I stood on 7th Avenue, it was clear things were wrong. Fire engines were already racing for downtown. People were standing around, talking to each other or making phone calls.

I hopped in a cab and headed for my office on 41st and Park. And by the time I got inside and upstairs to the conference room on the 14th floor, all of my colleagues were glued to the TV screen. Their looks said it all. People were already starting to cry, some just shook their heads in disbelief.

Most of the broadcasters were calling it on the air, live: terrorism strikes Manhattan, the heart of freedom and the economic capital of the world. It was insanity. We could not believe what our eyes were telling us was true.

Millions – perhaps billions of people – witnessed mass murder that morning. Has that ever happened before, in human history, where so many people watched others die at the same time, in real time? Horrible, horrible, horrible.

When the first tower fell, all I could think of was the fact that all of those rescuers had just died, trying to save others.

As the day wore on, we all focused on getting in touch with loved ones, friends, and colleagues. We tried to process the incomprehensible scope of the attack as we learned about the Pentagon and Flight 93. As New Yorkers do in a crisis, we headed to the bars. And by the end of the day, we were an entire nation in grief.

We knew it was bad. We just didn’t know how bad it was, and the reports were almost more than we could bear. At one point, we feared 25,000 had died in the WTC alone. The next day, the papers didn’t print, but on the third day, they did. The Daily News proclaimed that 10,000 were feared dead. And there were the posters. The faces of the missing. Thousands of people unaccounted for. Even though that number came down in the days to come, the fact that we had overestimated the death toll was of little comfort. And even now, that is the most haunting thing. Those faces. All those people, gone in an instant, but never to be forgotten.

At the time, surely no one could forget. We endured months of the smoking pit at Ground Zero, the smell of death and destruction enveloping lower Manhattan for weeks. We saw a sad, tragic almost never-ending stream of funerals of firefighters, police officers, and EMTs. We witnessed the start of war, and experienced numerous terror scares. One year later, the Post reminded us, fittingly, of what we had lost: 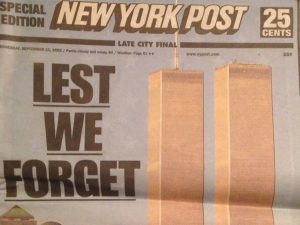 At the time, it felt almost unnecessary, for who could forget such a thing?

Well, you know the expression… out of sight, out of mind, right? After a few years, I think perhaps some people did forget, or at least they let things scab over. People moved on with their lives. Sometimes, that’s what people do.

But moving on isn’t the same as moving forward. The former seems to me like a passive act of resignation, whereas the other evokes a conscious act, a decision, from my perspective.

And I think you can say that occurred in my hometown, New York City, at least on some level and at least back then. This story would never have a happy ending, not with so many that we lost. But the City as a whole did rebound. And that’s important to note. The Freedom Tower represented the reemergence of downtown, which was once devastated and destroyed, ruined yet reborn. That’s the beauty of the thing. Despite how bad things were then, despite how many lives were lost, New York wasn’t ruined forever (despite current predictions). Zoom out, and New York remains a symbol of our perseverance. It reminds us, urges us, in the face of national crises, then in 2001 and now in 2022, that we MUST NOT FORGET. We will remember. And our greatest days can still be ahead of us, if we want them to.

And so as we reflect on all of the innocent lives lost that day and all the days since, I ask all of us to remember. Remember what it felt like. Remember the hurt. It was so easy to unite when we were attacked from without. These days, it seems like we are content to attack ourselves from within. It’s time to look in the mirror. Vow that those lives were not lost in vain. Vow to make their lives, and our lives, our work, our communities count for something. And go forward, together.

How To Have A Safe Holiday Tour With Staysure Discount Code?
rachelhouston Dec 29

How to Support Your Partner with Breast Cancer
silbchris Oct 21