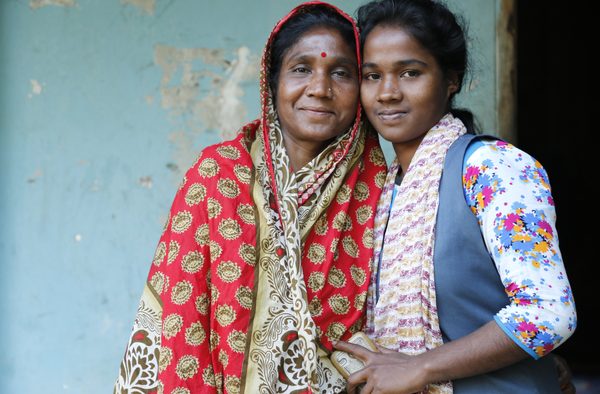 WaterAid stepped into Shamoli’s community and improved its tea gardens. The tea picker communities are typically the most marginalized group in Bangladesh due to its nomadic ancestry. As a result, tea plantation owners were responsible for their own healthcare and education — but they had very poor facilities. Prior to WaterAid’s assistance, the community relied on hand-dug wells and nearby streams, which people openly defecated by. The project lifted the morale of the community and left lasting impressions on hygiene for Shamoli’s culture group, her family and others as well.

Curator’s note: The following is an excerpt of Sugha Rani and Shamoli’s story as told by WaterAid staff in February 2017.

“We would work with the group to spread the messages that IDEA taught us, things like good sanitation, drinking safe water and washing [our] hands,” Shamoli said. “We do this through song and dance. This started 3 years ago when I was 11. Our situation before was bad. Before the project came, we would use the stream water for drinking and washing clothes. For [the] toilet, we would go out anywhere. People wouldn’t wash [their] hands before they ate, they wouldn’t use sandals when they went to relieve themselves, and they wouldn’t wash their hands after [using the] toilet. The IDEA people knew of my mother and they spoke to her. She got involved in the project work [and that’s how] they heard I used to sing, so they asked me to join the cultural group.”

She yawns and smiles, embarrassed — last night she sang at a wedding — left there at 1:30 a.m. and reached here at 5 a.m., then cooked for her family before sleeping.

“We sing folk songs,” Shamoli said. “I don’t have a music teacher, I learned by myself. I had an uncle who passed away last year who encouraged me. I’ve noticed several changes here. A big one is with menstruation. None of us were very aware of this, I wouldn’t know what to do, how to clean and dry the cloth that you use, so this is a change for me.”

She loves playing football and shows off her skills to us in the courtyard outside — quick footwork and an impressive ability to spin the ball on her fingertip.

“Before, if I played football during menstruation, my family would say, ‘maybe you shouldn’t go out now [or] maybe you shouldn’t play in this time.’ But IDEA taught us how to take care of ourselves and how to take care of the pain so now I can play even during menstruation. The first thing is to clean yourself and to be clean and hygienic. Whatever I use, if it is a pad it must be clean, if it’s a cloth I must wash it with soap and water, and after it dries I must fold it and store it carefully so that it stays clean. IDEA taught us if you are feeling bad, take some rest and don’t do heavy work. Sometimes the family tells us to take medication or to [use a] hot compress, but it’s not that bad anymore.”

“With the cultural group, I think we’ve been able to make a wider change. What we’ve been able to do together, all of us, is to bring about a change in people. People now understand the change, how their hygiene behaviour is important and affects others, [and] how safe water is important. Before we were like all the other households — we were not aware and now we are. I want to be a singer when I grow up and I also love sports, so I want to continue playing football. I’ve seen many girls have to fight to play football, but in my case my mother has always encouraged me. She wants me to be a good person and to follow my dreams in life. There are 12 kids in [the] cultural group, boys and girls.”

Linkedin
Tags:
Previous Story
Daniel Paul
Next Story
Getting over myself