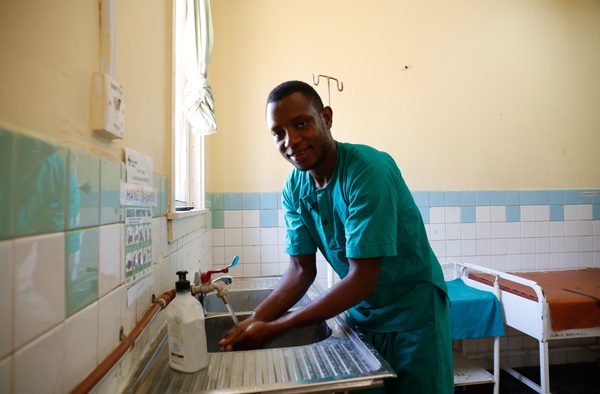 For many years, the Kiomboi District Hospital had subpar hygiene and sanitation practices. This resulted in several infant deaths, water shortages and other biomedical issues. Fortunately, in 2015, WaterAid, in conjunction with SEMA (Sustainable Environment Management Action), improved the sanitation and hygiene at the hospital. Since then, patient traffic to the hospital has increased, infant mortality rates have plummeted and the overall working environment has improved for the hospital staff. Daniel Paul, a midwife at the hospital, said, “My work has become more enjoyable because we have tap water all the time. I wash my hands easily on taps before and after handling mothers and their babies, the maternity ward is clean and all mothers who come here to deliver are also happy because they have water all the time and clean toilets.”

The following is an excerpt of Daniel Paul’s story as told to WaterAid staff in November 2016.

My name is Daniel Paul. I’m 26 years old and a midwife at Kiomboi District Hospital but I usually work in the neonatal intensive care unit, handling newborns with problems such as low birth weight and premature babies.

After WaterAid rehabilitated our water and sanitation system at Kiomboi Hospital this year (2016), we started witnessing an increase in the number of women coming here to deliver their babies. On average, we get 20 deliveries on a busy day and about 15 births on a not-so-busy day.

These days we have safe water all the time and as a result, my work has become more enjoyable. The wards are always cleaned on time; I wash my hands easily under the taps before and after treating babies and our patients are also happy to have a safe water supply and sanitation facilities nearby.

Before the project, we had a number of babies suffering from sepsis – due to poor hygiene in the hospital. For example, from January to May 2016, we had 10 newborns lose their lives due to sepsis, but after the project launch, from May to October, we have only had one baby die. There has been a big reduction in infections caused by poor sanitation and hygiene in the hospital.

Today the hospital environment is always clean and I feel very comfortable about my work since we have water, improved sanitation, and hygiene conditions.

I am very grateful to WaterAid because our expectant mothers now have a good waiting home, with new beds, bed sheets, mattresses and mosquito nets. They also have easy access to water, toilets, bathrooms and a place where they wash their utensils. Previously, as a hospital, we did not have a good incinerator and a placenta pit. Today, we have a modern incinerator for medical waste disposal and we also have a number of water storage tanks. Even if water stops from the taps due to a lack of electricity to pump water, we can collect our water from the tanks nearby.

I believe these achievements will be sustained because WaterAid has trained staff to operate and maintain the incinerator and the water supply.”