When was the last time you were yourself? 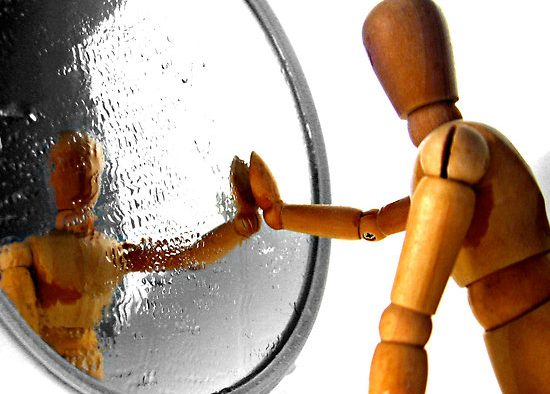 Whence did it begin? What’s the ultimate purpose of it? Numerous notions, beliefs and ideologies has been associated with it, and yet it is very vague. How many have lived their lives as it was meant to be? Is success a term of measure that is equally applicable for all? Or is life’s quality to be determined by contentment and peace of mind?

The eyes are still closed, the hands clenched, yet his cries were heard loud and clear, denoting his presence. Slowly he embraced the light that fell upon his eyes, and he gazed at the world in amazement, perceiving nothing as ugly nor beautiful. Slowly he distinguished the sounds of nature and the voices of his parents, perceiving nothing as vulgar or pleasant. His parents’ care and affection taught him the meaning of love, and his mother’s face, of beauty. Joyfully and excitedly he embraced his toys, for all he thought, the world was a massive playground, and all he needed to do was to experience and play throughout his life.

He began school, and it was bigger, grander, but all he had to do was the same, just keep doing, have an ambition, and wait for it to happen. He joined the race, and he competed and competed and competed. He had fun for sure, and he definitely learned new things, but nevertheless, he does not know where life takes him after that. The moment he entered college, he realised that all were eager to finish their studies from day one, and to finally become successful. Everyone reads and shares success stories of entrepreneurs and billionaires, and rush their lives, exerting themselves to be one of the most influential ones. One group of people emphasizes on the importance of grades and achievements to secure a great job, while another claims that those who are not so particular about their grades tend to be more creative and successful.

He became an adult, and he looked at how the young adults behaved, almost robotic on a daily basis, with sprinkles of happiness here and there. Revolving around the world with the world, just keep moving, not knowing what are they really seeking, not knowing why are they in a relationship, just to keep up with the world’s pace. Everyone’s eager to be mainstream, to join the bandwagon, from clothing to posing. Enmeshed in false ideas and impressions he tried to be like this or that person, but he can’t. He is depressed, he is anxious. He knew he is someone else.

He then decided to be himself. He still does what he needs to do, he works and pursues his interest, but he is not intimidated by the world, knowing that everyone works in their own time zone. Some may settle down earlier, some may take some time, but neither one is right nor wrong. He knows that he has to be himself.

All this while he believed what the society threw at him, but now he is clear. He can pressure himself to be like others, that’s his choice. He can live his life in his own way with full vigour, that too, is his choice. The world is still a grand playground. Everyone plays the game of life, not knowing what happens next. Actions are under their hands, but no matter what, the consequences are not. One doesn’t need to blame oneself. Doing what one needs to do, is a contribution to the world.

Inwardly, how different is an adult from a child, without the awareness, the accumulated knowledge, and the ego? Worries and expectations have clouded their understanding, and destroyed their peace. The ones who said grades are important, are not wrong, the ones who said C students tend to be more creative, are not wrong either. Each speaks based on what they chose to believe, and their beliefs are merely the result of the accumulation of numerous opinions and interpretations of others. Know thyself. Be thyself. You cannot be yourself without knowing yourself, and how can you know yourself if you refuse to walk your own path? Many may speak of the journey and place their opinions, yet you are the one who has to walk towards it.

The Time I Felt Like a Champion
Mike Rabin Jan 30