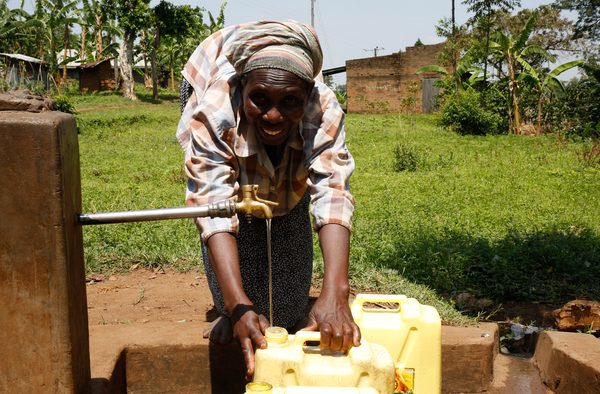 Masibo Safinah, 52, is all smiles about the conveniently located water taps in her village. In the 1970s, she recalled having to walk two kilometers to get water at a local river. The task was daunting because she would have to carry the water on her head and pass through the bushes because there were no roads. However, in 1993, a new water system was installed in Safinah’s village. This is one less problem Safinah has to worry about, as she is able to tend to her cattle and gardening.

Curator’s note: The following is an excerpt of Masibo Safinah’s story as told to WaterAid staff in 2016.

I am Masibo Safinah. I am 52 years old and a mother of seven grown up children. I have lived here in Naloha village (Bumboi sub-county) since I was a young girl in 1974. At that time we used to collect water from the River Nabuyonga or Namasyo — [which is] about two kilometres [away]. We used to carry water on our heads back home, passing through bushes because there were no roads. In 1993, when the Nabugimesi Gravity Flow Water Scheme was completed, we started collecting water nearby from taps within the village.

Fortunately, I have a water tap within my compound. I don’t pay any money to collect water from the tap. This is good because I am even able to collect enough water to feed my cows and I have more time to be in my garden. Everyone in the village appreciates having safe tap water nearby and some people have gone on to connect their own taps. Our children are healthier because they no longer suffer from diseases due to drinking unsafe water and our land is more valuable because [we] have free tap water.